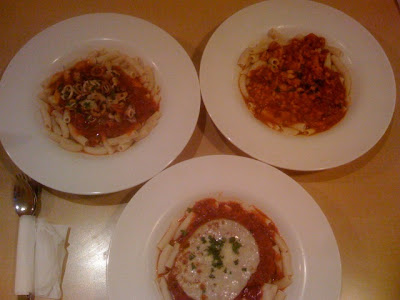 3 Penne Pastas at Penne Pasta Cafe
Last night I had an event to attend in Lahaina with some friends, so Devin, his sister, and I had dinner there on the west side of the island. I had been wanting to try the pasta at a restaurant I read about. Penne Pasta Cafe offers gluten-free brown rice pasta, penne shape only, for $2 extra. They also have dairy-free mozzarella cheese available for another $2 extra.
We all decided to get the brown rice pasta, but Devin was confused as to what chicken parmesan actually was (he was thinking chicken primavera). I asked him to ask the cashier if there was any breading on the chicken, but he got distracted and forgot. So, of course he ended up getting the brown rice pasta, but he also had breaded chicken sitting on top of it. That was a bummer, especially since he paid the extra for the brown rice pasta. He had no complaints about the food, and dug in happily. Devin said that everything was cooked very well, and that it was definitely worth the $11 (including pasta substitution cost). He wouldn’t pay $20 for it, but he was pleased with his meal. Oh, and he said that if he hadn’t known it was brown rice pasta, he would have thought the penne was high quality “regular” pasta.
He did find it funny too that they’d sell him brown rice pasta and not mention the breading on the chicken, but perhaps they thought he knew what he was doing. To avoid this, I think they should provide descriptions of their various entrees. A trip back to the restaurant is in order the next time we’re over in the area, according to Devin. 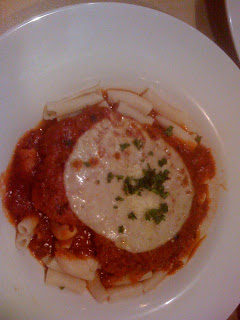 Chicken Parmesan
(not gluten-free)
His sister ordered baby calamari in pomodoro (tomato and basil) sauce over brown rice penne. She too was happy with her meal, though she said she could have eaten a lot more. We both agreed we could have split another plate of pasta, but we’re both rather gluttonous right now.
I was able to taste her dish, and the calamari wasn’t tough and it had a nice smokey flavor to it. I do think it was a little too salty, but the flavors all worked well enough together. They also could have gone a little heavier on the calamari as I am a huge fan of little squid rings. The price of this dish was $12 with the substitution of the pasta. 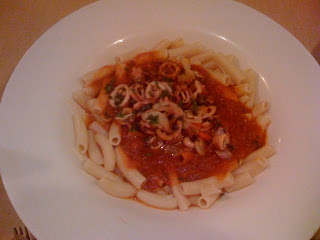 Baby Calamari in Pomodoro Sauce
I chose to go with clams in the pomodoro sauce over brown rice pasta. The sauce was a little thinner than I would have liked it to be. The sauce on the calamari pasta seemed slightly thicker somehow. I was quite happy with the amount of chopped up clams in my sauce, but I could most certainly tell they weren’t fresh. They were clumped together in places as though they were scraped out of a can (think canned tuna). I only had a tiny bit of grit from the clams, and my pasta was not over cooked or undercooked. My pasta was also $12 with the substitution. 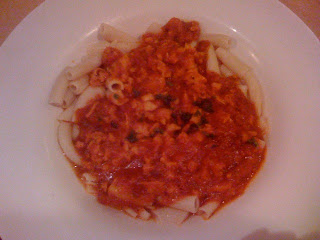 Clams in Pomodoro Sauce
We drank water, although they do have soda, iced tea, Republic of Tea drinks, wine, beer, and some other spirits for sale.
We didn’t have dessert, but they were offering bananas foster with vanilla ice cream as the special dessert while we were there. 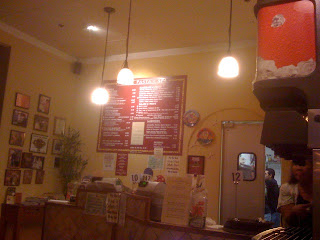 Place Your Order Here
On one wall was a large flat panel TV showing TV Land (classic television channel). The space wasn’t brightly lit, however I didn’t find it uncomfortably dark either. I think the owner has the lighting just about right. My personal opinion is that some music would be better than the television. 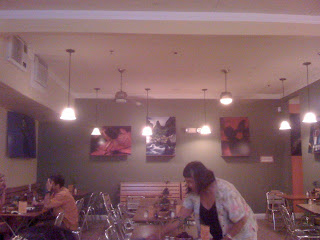 The Dining Area
I can’t speak about what they do to prevent cross contamination as I didn’t get to speak to the owner, but I am feeling perfectly fine and I’m still wanting more pasta. The owner also owns Maui Tacos.
I believe the brand of pasta they’re using is Tinkyada. It reminded me a lot of the penne Tinkyada pasta I make at home, but not overcooked and not wet(I need to drain my pasta better).
If you’re on Maui and want gluten-free pasta you should definitely go to Penne Pasta Cafe. I think it was so worth the drive to get to dine on Italian style food at a restaurant again. I’m salivating just thinking about getting some more soon.
Penne Pasta Cafe
180 Dickenson St.
Lahaina, HI 96761
808-661-6633

This work is licensed under a Creative Commons Attribution-Noncommercial-No Derivative Works 3.0 Unported License.